Flying has long been a man's profession. Amid a pilot shortage, will that change? 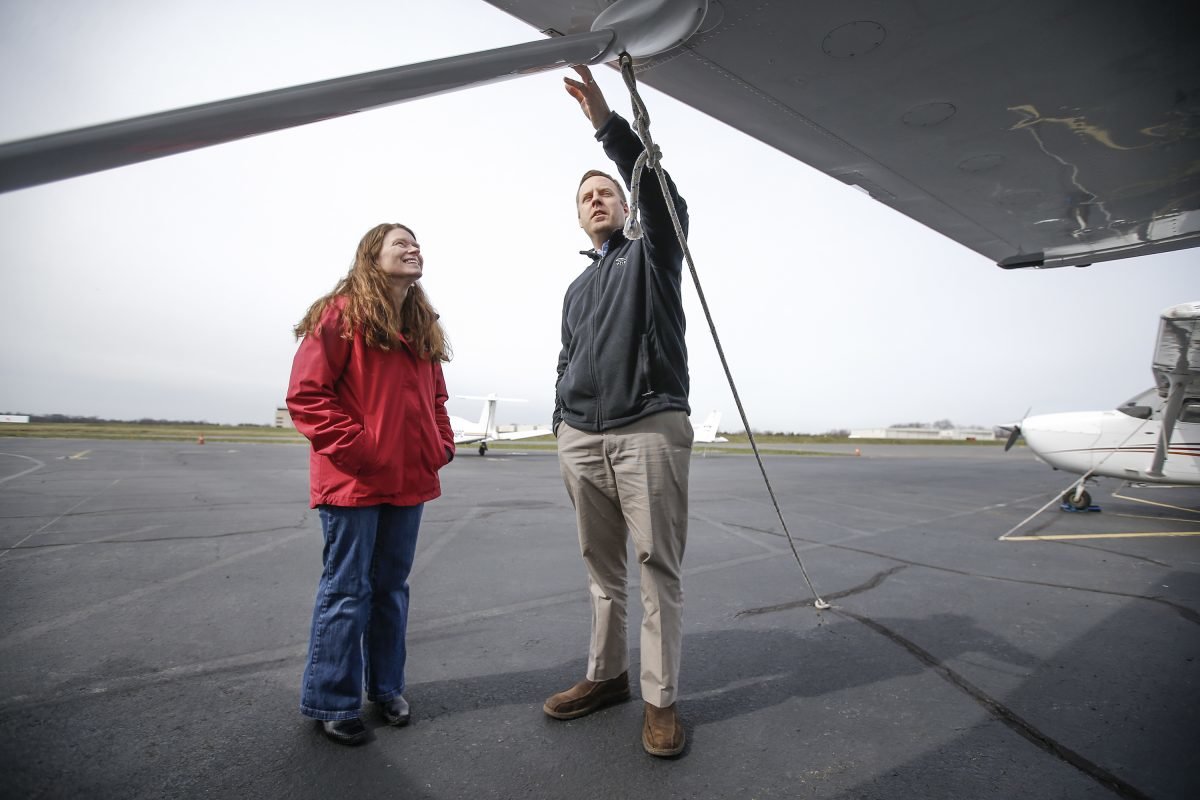 Since she was a young girl growing up in small-town Maine, planes took Cindy Treyger’s breath away. But becoming a pilot just didn’t seem like a realistic option. So she did the next best thing.

Treyger, a mother of three who now lives in Medford, Burlington County, joined the Air Force, where she worked for nine years as a Russian linguist. In the service, she met her husband, a flight engineer. But the itch to fly never went away, which is why — thanks to the Department of Veterans Affairs covering her tuition — Treyger is now halfway through a two-year program that will yield the pilot’s license she’s wanted since childhood.

“Every pilot’s dream is to work at an airline,” said Treyger, 42, who is enrolled in a joint program at Infinity Flight Group in Trenton and Mercer County Community College. If all goes according to plan, Treyger could be employed as an airline pilot within just a couple of years.

When she gets there, she’ll likely fly from a seat that was long occupied by a man.

Across America, airlines are facing an unprecedented shortage of pilots, with some estimates indicating U.S. airlines could be short 14,000 pilots in 10 years. So some flight schools and airlines are actively recruiting people who traditionally haven’t been pilots: women.

Nearly half the country’s workforce is female, but for the last century, flying has been a man’s profession. Though there are more than four times as many female pilots today as there were in 1960, women still are only 7 percent of all licensed pilots, according to the Federal Aviation Administration. Of pilots with licenses to work for airlines, women make up just 4 percent. In Pennsylvania and New Jersey, fewer than 300 women have that license, compared with 6,500 men.

Historians and industry leaders say it’s not necessarily a failure on the part of airlines. The applicant pool is similarly male-dominated, and experts largely blame long-standing stereotypes for keeping women from getting licenses.

“There’s still a lot of discrimination out there,” said Lisa Cotham, secretary of the Ninety-Nines, a 90-year-old organization of licensed women pilots. “There are still passengers who get freaked out at women in the cockpit.”

Female Pilots in the United States

Nationally, only 7 percent of certified pilots are women, a number that has changed little in the last 10 years. The percentage of female pilots in Pennsylvania and New Jersey is a little below the national average. Western states are typically above the national average.
Learn more

Of the five airlines that serve the most passengers out of Philadelphia International Airport — American, Southwest, Delta, Frontier, and United — none would disclose the number of female pilots it employs. United did indicate that “almost 8 percent” of its 12,000 pilots nationwide are women, but a spokeswoman declined to provide the exact figure.

The International Society of Women Airline Pilots keeps a running tally of how many female pilots they believe are employed at the major airlines all over the world based on reports from the group’s own members. When it comes to pilots, most airlines, according to the group, employ between 3 percent and 8 percent women.

Society chairwoman Glenys Robison, a retired Air Canada captain who lives north of Vancouver, cited two major reasons for the current dearth of American female pilots: Airlines often hire from the military, which is facing a pilot shortage of its own and where less than 6 percent of Air Force pilots are women. She also blamed “unsupportive labor laws” related to maternity leave that she said can stymie women from being able to balance a family and a career in the cockpit. (The health requirements are stricter for pilots than for flight attendants.) Robison said recent moves by some major airlines to implement new parental time-off policies “will go a long way toward correcting some of the imbalance.”

Maggie Linn, a 35-year-old mother of two who lives in Doylestown, is an American Airlines pilot who helped develop a new airline maternity policy unveiled last year that offers 10 weeks of paid leave. Linn said that in the last 15 years she’s spent as a pilot — everything from a flight instructor to a first officer at American — she couldn’t think of a time she faced outright discrimination because she was a woman.

“I was aware that people thought maybe it was unusual,” she said, “but never something that was shocking.”

Yet, when Cassie Mastriana told her high school guidance counselor that she wanted to be an airline pilot, Mastriana was told “that’s a man’s job.” But she’d told her father since she was 5 that she was going to be a pilot, and she never wavered. 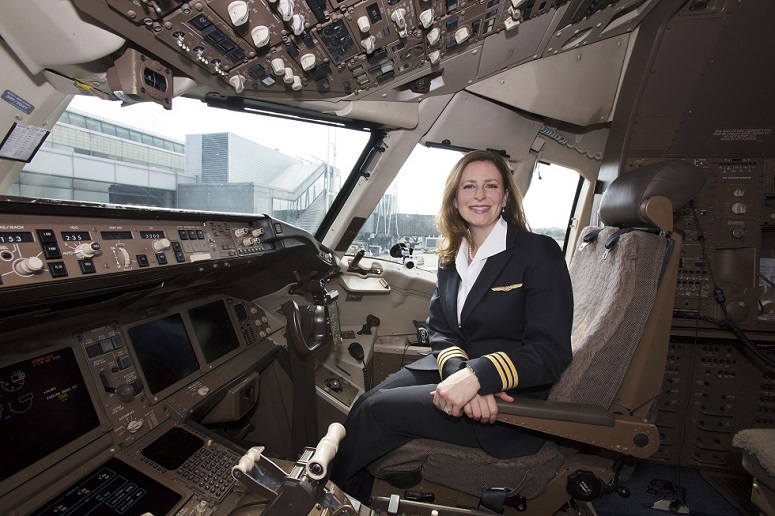 Today, Mastriana, of Doylestown, is a flight manager with United, an administrative position she’s held for the last two years while raising two kids. She still flies two or three times a month to keep up with her certifications, and she anticipates that one day she’ll go back to flying full time.

Some good news on the horizon for airlines looking to hire more women: Of licensed female pilots — many of whom don’t yet fly commercial — the largest cohort is younger than 30, according to the FAA. That means hundreds following the typical career path — school, teaching, and work at a regional airline — will soon be ready for a major airline.

That could be key to helping airlines that have had trouble replacing retiring pilots, said Rob DeLucia, vice president of labor and employment for Airlines for America, a trade group that advocates on behalf of airlines.

Historically, besides the military, the biggest pilot pool has been the children of pilots, DeLucia said. But the latter category has become less interested after pay cuts, furloughs, and benefits reductions took place after 9/11. As the demand for flights decreased and the recession took hold, airlines also hired fewer pilots. For example, DeLucia said, in all of 2010, JetBlue was the only airline nationwide of the trade group’s members to hire pilots. It hired 30.

Yet in the last five years as the industry has financially rebounded, larger airlines have embarked on a hiring spree, plucking pilots from the regional airlines, DeLucia said.

But that tactic has had something of a trickle-down effect, said Katie Pribyl, vice president of strategy and programs for the Aircraft Owners and Pilots Association: Some of the smaller, regional airlines have become so understaffed that they’ve had to ground planes. Meanwhile, she said, flight schools across the country are desperate for instructors to train newcomers so those students can get the required experience at a faster pace.

Pribyl, a former airline pilot herself, said the association sees women as an important part of meeting industry workforce needs.

A Decline in the Number of Commercial Pilots

Figures are nationwide, in thousands. 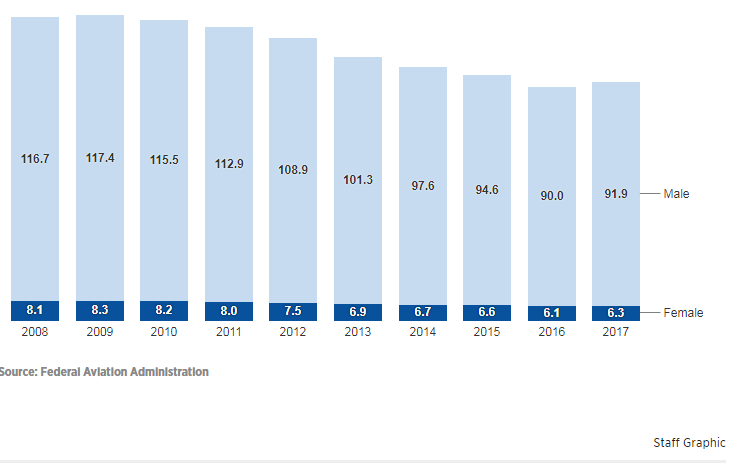 And it’s not just female pilots who would benefit. Some studies indicate women pay greater attention to detail and are calmer during problems, skills that make them adept at flying planes.

Steven Richards, owner of Brandywine Flight School in West Chester, said women are “naturally suited to do extremely well,” and yet “they’re not here.” He said about 5 percent of the students who attend Brandywine are women.

Richards said there’s long been an image of a stereotypical pilot, but aviation safety has changed, along with what it means to be a good pilot.

“Instead of being a swashbuckling risk-taker, the epitome of a great pilot is a person who’s calm, can multitask, and mitigate risk,” he said. “The change has taken place, and aviation safety is greater than it’s ever been. Could it be that our image of what a pilot needs to be hasn’t kept up with that?” 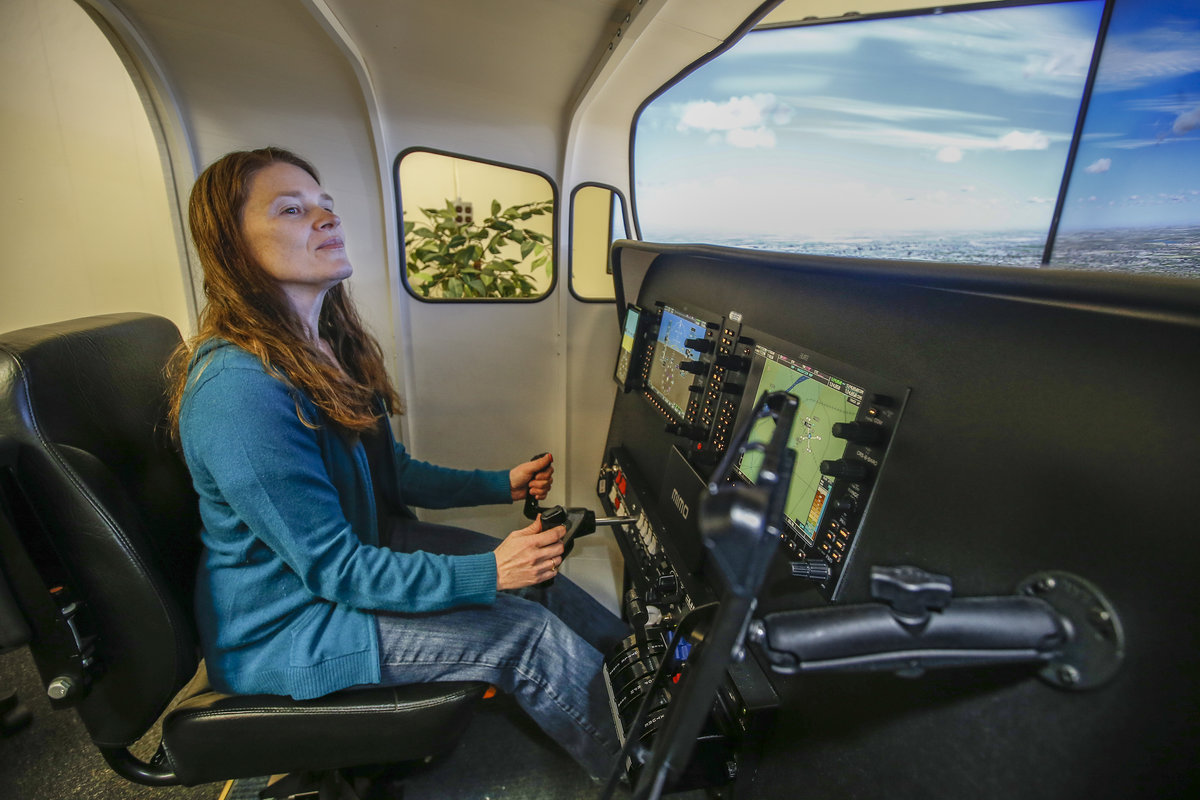 Before World War II, when the Air Force first allowed female pilots, the number of women in aviation was “crazy small,” said Deborah Douglas, author of American Women and Flight Since 1940.

Then, in the early 1990s, the federal government removed provisions to allow women to fly combat missions. There are still barriers today keeping women out of the Air Force, including a requirement that pilots be at least 5-foot-4. In 2015, the Air Force announced it would grant more height waivers as part of an effort to increase diversity in its ranks.

DeLucia said there’s evidence to suggest minority representation in the cockpit will improve, too, namely that the Air Force Junior ROTC recently reported that, of its 120,000 cadets, 58 percent are people of color.

Still, Douglas said the number of women of color working as pilots is almost “statistically improbable.”

“Lightning has to strike in the same place many times in order to make a black woman a commercial airline pilot,” Douglas said. “Those odds are hard to come by.”

And, despite “valiant” efforts to get more women interested in aviation, she’s not convinced the overall demographics will change so long as societal stereotypes exist among all science and technology fields.

“As long as, fundamentally, we perceive airplanes as male technologies … ,” she said, “you will continue to see a small or proportionately smaller number than is normal to the population.”

Trade groups, airlines, and nonprofits have developed programs to recruit young girls, and other groups offer scholarships for women who want to be pilots.

Beth Hollar benefited from programs like these. In her mid-20s she became a flight attendant but ended up frequently hanging out in the cockpit with the men. One of the pilots once said to her, “Why don’t you just go to flight school?” A lightbulb went off.

Now, 46 and living with her husband (who is also a pilot) in Pipersville, Bucks County, Hollar flies 737s all over North and Central America, and she frequently sees young girls in the airport who say they want to be pilots.

Change taking off for women pursuing careers as pilots